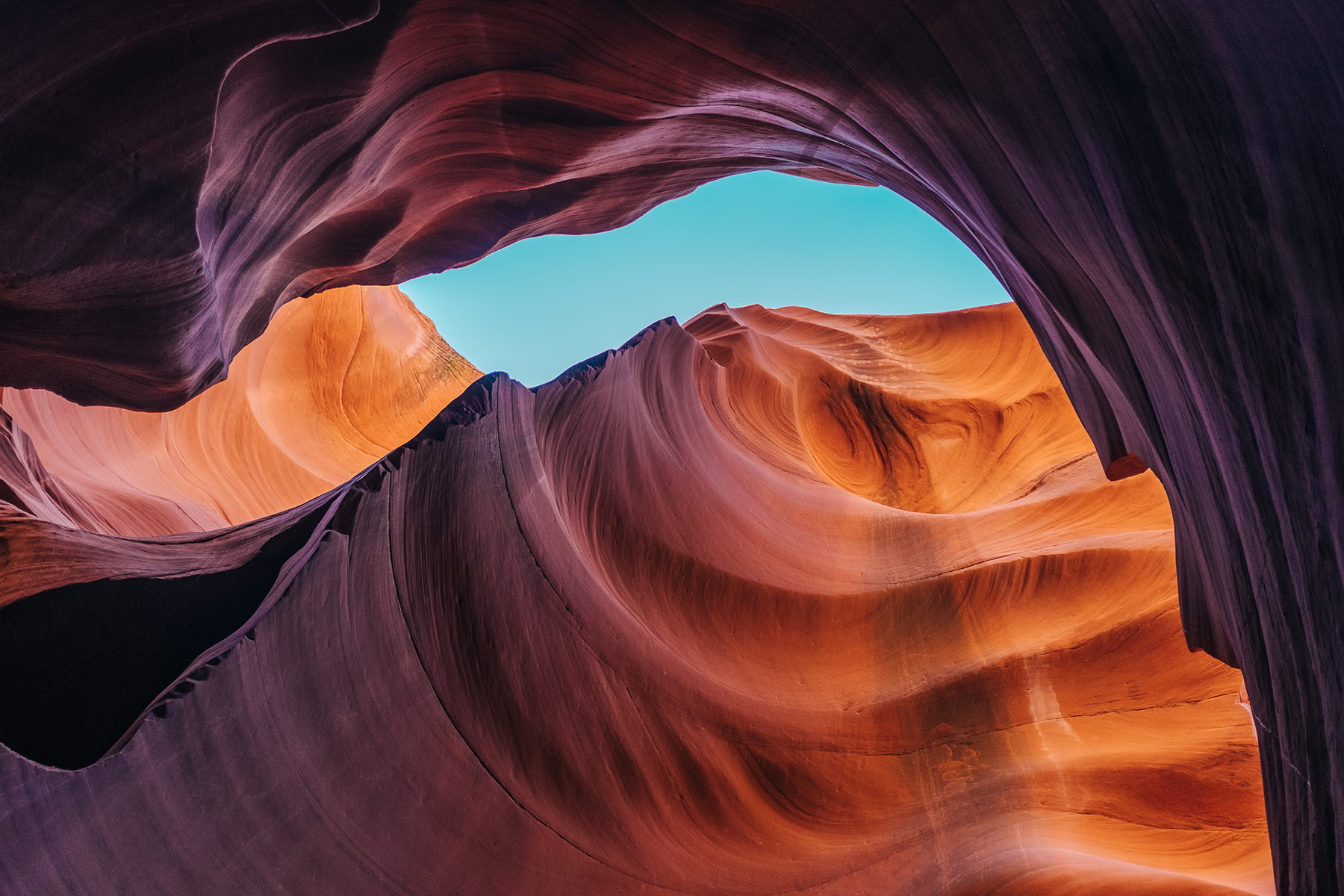 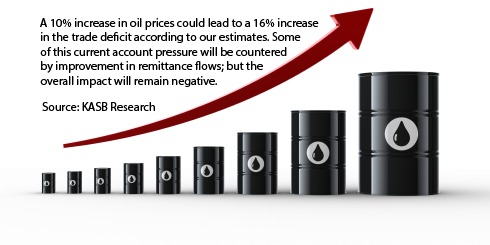 Oil prices are likely to remain a significant investment theme for 2018.

It is quite ironic that when two years ago, oil prices had dipped near $30, the consensus view was that this is a structural trend driven by shale production in the US and shift in demand towards more efficient energy sources. But as the saying goes, the cure of low prices is lower prices and the cure for high prices is higher prices. Since July last year, oil prices have risen by 66%, which is tenth biggest spike in the prices over the past 70 years (click here).

The reasons being cited for the rally are production cuts by OPEC (1.8m barrels per day reduction in production, which started in January 2017 and will run till end of 2018), decline in the supply from Venezuela due to economic issues (produced 1.4m barrels per day in April, 540,000 barrels lower than same period last year), and threat of sanctions on Iran (click here).

Over the past few weeks the Street’s forecast for oil prices have been steadily raised and there are rising expectations that oil prices can cross the $100 level. Some believe that changes in environmental standards enforced by the International Maritime Organization (IMO) in 2020 which set new caps on the sulfur content in marine fuel oil could lead to as much as 86% increase in the cost of oil shipments and push global oil prices above $100 (click here).

The rise in oil price back to the levels last seen in 2014 could create risks for the global economy in general and to oil importing countries like Pakistan in particular.

Interestingly, over the past 16 years, the directional relationship and correlation between oil prices and KSE-100 index has been positive. The market rallied over 2002-2008 while oil prices went up from $20 to over $130. Granted, that besides the correction in 2008, 2015 and 2017 the market has only moved in one direction, so measuring statistical correlations can be spurious. However, it does illustrate that there is no negative relationship between the two. This is very interesting. 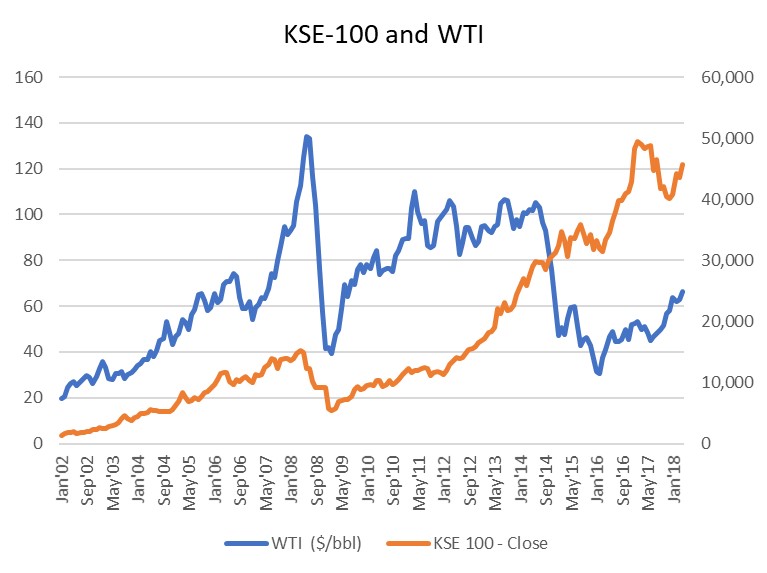 Firstly, one of the reason for the positive correlation is the fact that energy related companies account for around 22% of the KSE-100 index. The stock prices of oil majors such as OGDC, PPL and POL have positive Betas of around 0.55-0.58 (correlation) with oil prices (highest correlations is of OGDC). Consequently, there is a direct positive impact on the share prices of these companies. 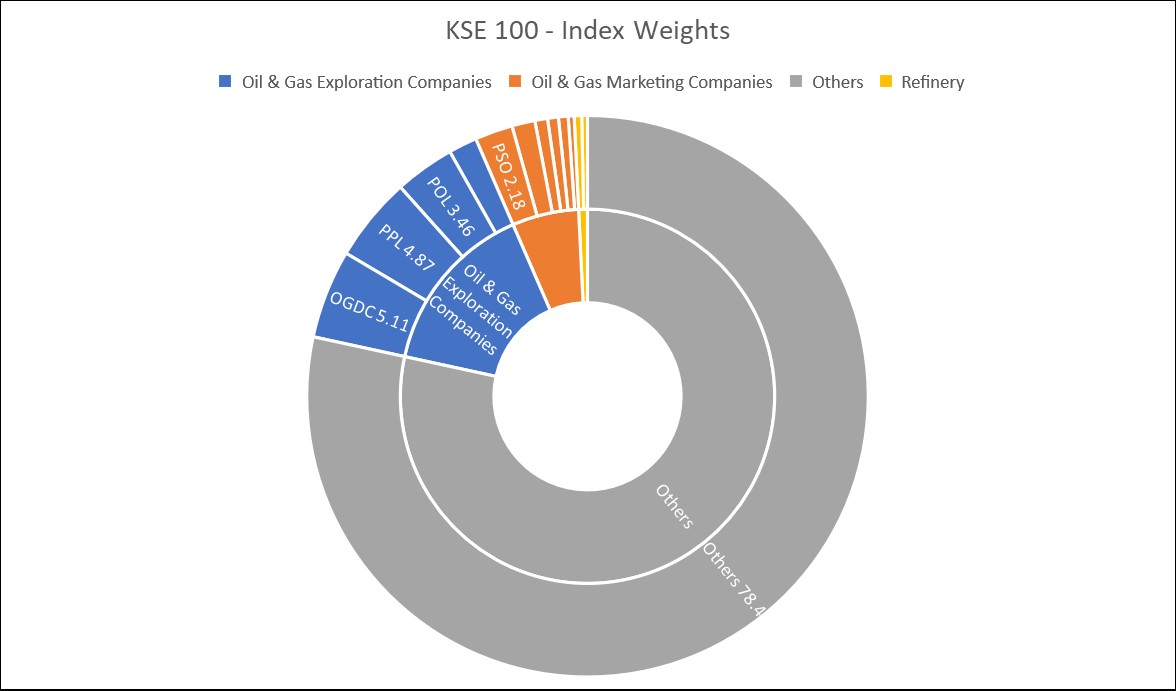 Secondly, it indicates that most of other industries are also able to pass on the cost of production increase to the consumers. Of course, equity prices measure nominal values and the real returns from the market (after adjusted for inflation) would probably be lower.

Since July 2017, when oil prices to rally, oil majors have substantially outperformed the market (POL and PPL are up +55% each and OGDC is +23% relative to KSE100). These stocks should continue to perform well in line with oil prices. The new budget has given very substantial incentives to the refinery sector, such as tax incentives to import machinery for capex projects. This should bode well for stocks such as Pakistan Refinery and Attock Refinery. We do not have any stock recommendations on this sector yet and are in process of expanding coverage. 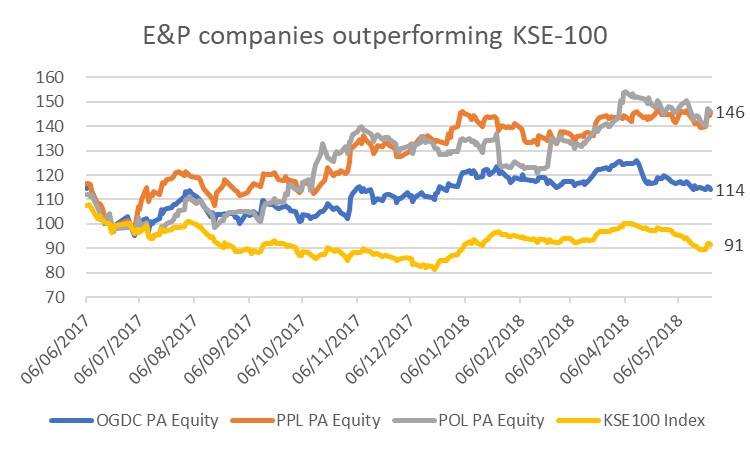 Not only the stock prices of E&P companies have high correlation with oil prices but their earnings are also strongly linked. This could be seen from the charts below which plot oil prices with Net Income of the three oil majors (OGDC, PPL and POL). 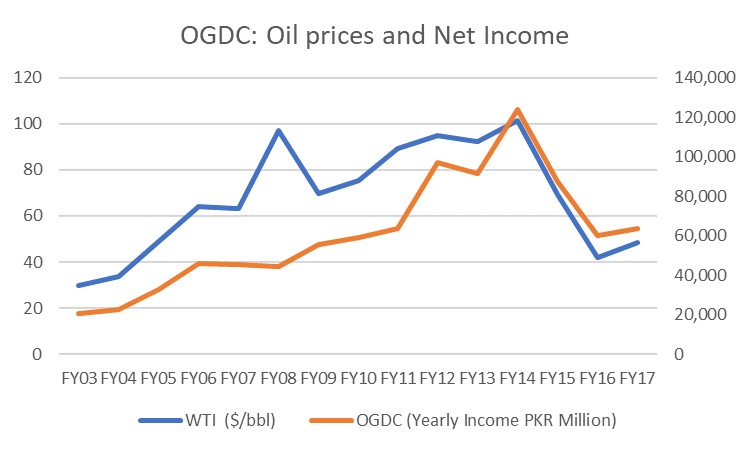 Impact on the economy

According to our estimates a 10% increase in oil price leads to a 16% increase in the trade deficit, keeping all other things constant. Oil accounted for 28% of the total import bill in April 2018 according to data from State Bank of Pakistan. During the last time when oil prices were near $100, oil used to account for around 40% of the monthly imports. The oil import bill of US$1.36bn in April is still 23% less than the peak level. In our model, we kept oil imports flat as the average of the levels over the past 12 months. If we adjust the prices to $79, it leads to a 16% increase in the trade deficit.

Another interesting observation from SBP data is that machinery imports account for only 14% of total imports and imports from China in total account for 20% of the bill (in April 2018). This suggests that the commonly held view which blames CPEC related imports from China for the current account deficit is not entirely correct. As we stated in our earlier blogs, we think the central issue has been the under performance of exports due to a flawed exchange rate policy. We expect this to be addressed via both exchange rate adjustment as well as a direct fiscal measures to promote exports (should be positive for export oriented sectors such as Textiles and Software exports).

The impact on the current account could be dampened by a positive impact on remittance inflows from the Middle East. However the net impact would remain negative, in our view.

Higher oil prices should also feed into higher inflation. Housing, water, electricity, gas and fuel account for 29.4% of the CPI basket and Transportation accounts for 7.2% (click here). So even purely mechanically, higher prices would lead to direct impact on around 35% of the basket used to measure inflation. According to Energy Book of Pakistan, 49% of the oil imported is used for transport, 44% for power generation and 7% for industry usage (click here).

As we have stated in our earlier blogs, inflationary pressures could build up this year due to the combined impact from rising oil prices and FX depreciation. We expect further 200bps increase in the interest rates this year. This should bode positively for banks in the near term (we have an Outperform rating on MCB, Bank Alfalah and UBL).

From a macro perspective, we like sectors such as oil and gas, banks and companies in export oriented sector. We think June would be an important month for the capital markets. Greater certainty on the political front and a less unfavourable outcome from the FATF review could lead to a positive sentiment in the market, especially if the tax amnesty scheme brings greater liquidity.

Our sales desk has been busy ramping up client onboarding and we look forward to working with you as our clients.